Our nation is struggling to treat lifestyle constructs that foster chronic disease, an opioid crisis, and the existence of an obesity epidemic. Further, according to the National Institute of Mental Health (NIMH), 6.7% of U.S. adults have suffered from a major depressive episode at least once in their life, and another 19.1% have suffered from anxiety in the past year. That’s more than 45 million people at any given time!

Why a population with access to advanced medical research and technology is scrambling to maintain its own well-being is a lengthy discussion ripe with conflict between science, time and fiscal interest. But in contrast, fueled by the end of a prohibition on hemp and legal acceptance of medical marijuana by many states, CBD has been embraced by an ever-rising populus for its ability to do good within the body. Some are going so far to consider it a historically-proven panacea.

But if you’re new to cannabis or wanting to update your education on the topic of CBD, you may ask yourself the following: How does CBD actually illicit the sought-after mental and physical changes we hear about, and what don’t we know? CBD is consumed for a multitude of reasons – to promote a better mood, combat side-effects of THC, and help decrease pain. But of the supporting research that exists, many studies are underpowered, lack good control of variables, don’t include human subjects, and have yet to provide substantial evidence of efficacy, despite the mounting evidence of CBD’s widespread, therapeutic promise.

First, it is important to understand what CBD is, and what it is not. Cannabidiol (CBD), in its neutral and “activated” form, is the second most abundant phytocannabinoid produced by the cannabis plant. It trails only behind ∆9-tetrahydrocannabinol (THC), the neutral, active component that most people associate with marijuana.

CBD is often referred to as a non-psychoactive (and therefore more socially acceptable) cannabinoid – a technical misrepresentation. By definition, any substance that elicits a change in psychological state or mood can be classified as pharmacologically psychoactive. (Psychoactive should not be confused with intoxication, a term synonymous with being “high,” like after consuming THC.)

It is used by many individuals to treat non-clinical depression and/or anxiety, both classified by the medical community as mood disorders. A 2010 study published in BJP supports the notion of CBD as an antidepressant because it may activate 5-HT1a (serotonin) receptors. Serotonin is an important neurotransmitter responsible for regulating mood and the sleep/wake cycle. CBD’s agonistic properties may act similarly to serotonin, promoting mood balance like an antidepressant. Further, its interaction with the larger 5-HT receptor family may support its use as a panicolytic (anti-panic) drug, which may provide benefit for those suffering from panic attacks.

The strongest example in support of CBD’s psychoactivity can be illustrated by the 2018 FDA approval of Epidiolex, a cannabis-derived CBD drug for use in the treatment of Lennox-Gastaut and Dravet syndromes, two serious forms of epilepsy. A solid scientific consensus has yet to be reached, however, its mode of action as an anti-epileptiform and anticonvulsant is thought to be due to a combination of cumulative effects. These include effects on inflammation, 5-HT serotonin receptors (like described above), and the ability to modulate GABA channels. (GABA is a neurotransmitter that prevents overstimulation of the nervous system, and its receptors are often the target of certain types of anti-anxiety drugs, like Xanax and Valium.)

At this point, it is clear there’s much more to CBD’s interaction within human physiology than we understand. The compound has been praised by many for its anti-inflammatory properties, potentially leading to pain relief and assisting in amelioration of some of the aforementioned disorders.

〉Nerd alert! As an immunoregulator, it’s thought that CBD has an effect on the production and action of various cytokines responsible for regulating inflammation. According to several studies, CBD may increase the activity of interleukin-10 (IL-10) and regulate the pro-inflammatory effects of IL-6, both glycoproteins responsible for regulating inflammation. Though more investigation is warranted, the compound may be useful in treating pain and both Type II diabetes.

CBD has been shown to assist in the prevention and counteract several adverse effects of THC intoxication, such as anxiety and memory loss. According to a 2013 article published in Frontiers in Psychiatry, CBD may inhibit these unwanted effects by preventing the reuptake of anandamide, an endogenous and abundant cannabinoid made by our own bodies. Anandamide has a stronger affinity for (or connection to) CB1 receptors than THC – it’s a better fitting key to unlock its own effects the endocannabinoid system. Less anandamide reuptake means more of it is available to be used by the body, trumping THCs ability to make us “high.”

〉Did you know? CBD’s ability to decrease intracellular calcium concentration by way of T-type calcium channel inhibition may also help prevent the neurotoxic effects of high or prolonged use of THC. This mechanism may also play a role in CBD’s anticonvulsant properties.

The understanding of CBD’s psychological and physiological activity within the human body has progressed far beyond this publication. It is being investigated to treat psychosis in Parkinson’s disease, and according to a study being conducted at the University of Miami, may promote recovery in individuals who have suffered from sustained concussion and traumatic brain injury (TBI). Regardless of personal perspective, there does exist a small but growing database of respectable scientific research on its therapeutic potential, and it can only grow from here… stay tuned! 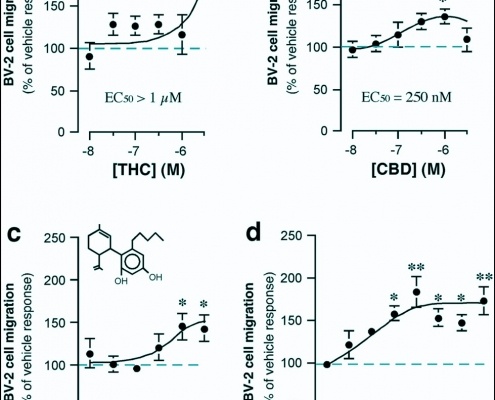