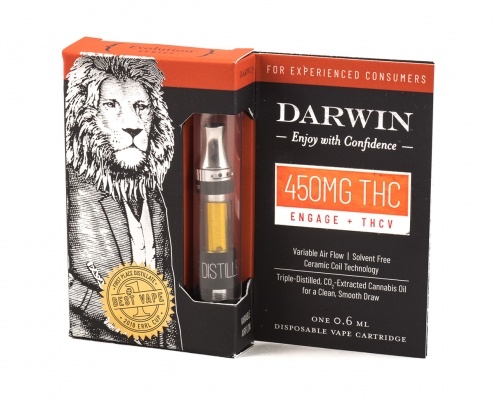 THCV is rumored to be a new therapeutic power player, with positive impacts on health both mentally and physically. Many consumers state that cannabis strains and products containing tetrahydrocannabivarin (THCV) help them focus and improve mental engagement, as well as decrease their appetite while medicating. But what’s even more intriguing about this cannabinoid is the supporting evidence surrounding its use to potentially improve insulin sensitivity and some other significant underpinnings associated with diabetes. Let’s dig in!

THCV is a structural analog of Δ9-tetrahydrocannabinol (THC). This means that the molecular structures are very similar to one another, but a differentiating component exists, such as one or more atoms or structural group. (The image below illustrates the difference between the molecules.) Certain chemovars of cannabis express a gene that produces the compound divarinolic acid, which combines with geranyl pyrophosphate (GPP) to form CBGVA instead of CBGA, and therefore THCVA instead of THCA. Other “varin” cannabinoids exist as well, such as CBDV, CBCV, and CBGV. 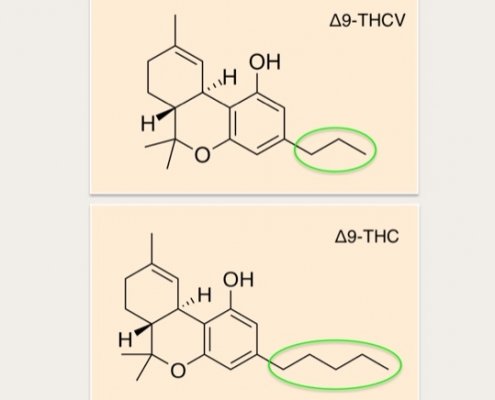 THCV and THC are analogs. The circled portions of the molecule highlight the subtle difference between the two.

The Therapeutic Value of THCV

THCV is classified as a CB1 “receptor neutral antagonist,” which in a general sense means it has no direct effect or slight opposing effects on the endocannabinoid system (ECS). It differs from CB1-activating compounds like THC. Because of this, THCV may turn down ECS activity, potentially decreasing and preventing unwanted effects like memory impairment, the inability to recall vocabulary and thoughts, a slower perceived reaction time, as well as paranoia.

It also binds strongly to CB2 receptors, having a slight agonistic, or activating effect, opposite than when interacting with CB1 receptors. This unique combination of cellular interactions allows THCV to do what it does best!

The unique compound may be classified as one of a few psychotropic and intoxicating cannabinoids found in cannabis, however, the experience is not synonymous with that of THC, and its actions may be regarded as dose-dependent. This means, as the dose increases, it is thought that THCV may switch and become a partial agonist, or activator of the entire ECS, activating both CB1 and CB2 receptors. Anecdotal evidence supports the onset of activity is much quicker, milder and of a shorter duration, and it may be assumed that less is required for therapeutic effect (you’d be lucky to find a strain containing 0.5% – a little goes a long way).

Research supports the notion that THCV may combat the adverse effects associated with being sensitive to or consuming too much THC. Its mechanism of action suggests this based on how it binds to ECS receptors, predominantly when the two cannabinoids are consumed together. That being said, evidence further states THCV may be effective in combating anxiety and short-term memory impairment. Patients prone to anxiety when consuming cannabis may be able to worry less about using strains and products containing it.

What is even more intriguing? THCV may help combat the munchies, so unless you’re using cannabis to help you gain weight, this could be a major benefit. Diving a bit deeper, several studies have shown the effects of neutral antagonists, like synthetic cannabinoid AM4113, to block endocannabinoid tone and lead to a decrease in appetite. The mechanism of THCV is similar, though more research needs to be conducted in support of these claims.

A very compelling animal study was published in a 2013 edition of Nature’s Nutrition and Diabetes, illustrating the positive effects of THCV on insulin sensitivity. In the study, both genetically obese (ob/ob) mice and dietarily-induced obese mice were placed on different THCV dosing regimens, both alongside control groups that received a placebo treatment. The research team tracked body mass, blood glucose and insulin levels were measured (among other biomarkers). Overall, THCV reduced glucose intolerance in all mice, improved insulin sensitivity in some of the mice, and restored insulin signaling in liver cells.

What does this mean for diabetics? THCV could be a potential drug useful in controlling blood sugar and perhaps treating the underlying causes associated with diabetes and metabolic syndrome. These findings are important and promising on many levels, and more clinical trials investigating the therapeutic potential in those with diabetes are warranted.

Where can I find THCV?

Some strains that express the gene leading to THCVA production (thus THCV) include Durban Poison, Jack the Ripper and GSC. However, if you come across a strain that includes one of these as a cross, it doesn’t guarantee that the gene was expressed in the chosen phenotype that causes the plant to produce THCV, so do your homework. And don’t expect to find it frequently or in high potency (even 0.5% in cured flower isn’t typical). There are a few cannabis products that contain THCV and are specifically formulated to maximize its therapeutic benefits. One such product is the Engage + THCV vape cartridge produced by Darwin Brands. The oil contains about four times more THCV than the higher potencies found in naturally grown strains of cannabis flower, ensuring the consumer gets the desired and consistent effect, maximizing the therapeutic value of this awesome cannabis compound. Happy medicating! 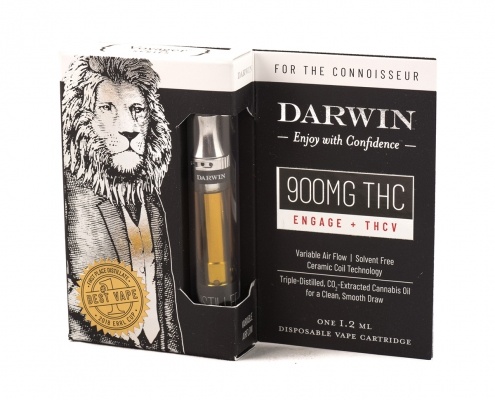 CBD, Cannabidiol – What does it actually do?
Exclusive Offers