The cannabis plant is comprised of much more than cannabinoids like THC and CBD.  It is rich in many phytochemicals, including terpenes and terpenoids.  These volatile, odorous organic compounds act as antioxidant, anti-fungal and anti-bacterial agents, protecting plants against disease and infection, and are shining in the current spotlight for their therapeutic value. But what exactly are they?

Phytochemicals are a group of biologically active compounds found in plants that provide some type of health benefit. They are not required by the human body to sustain life, however, many of them have proven to aid in the prevention of disease and reduce the risk of developing cancer.  Terpenes, along with polyphenols, phenolic acids, antioxidants, and flavonoids are all types of phytochemicals, and they are just a few of many classifications that are currently accounted for.

Terpenes are among several groups of low molecular weight chemicals responsible for the aromas associated with flowers, citrus, and conifers – they can be attributed to why lilies and lilacs smell distinctly sweet and floral [(E)-????-ocimene], and that nug of Lemon Train Haze has a delicious, citrus-y zing to it (D- and L-limonene).  The variety of odors attract pollinators and fight off consumers, assisting plants in both reproduction and survival. 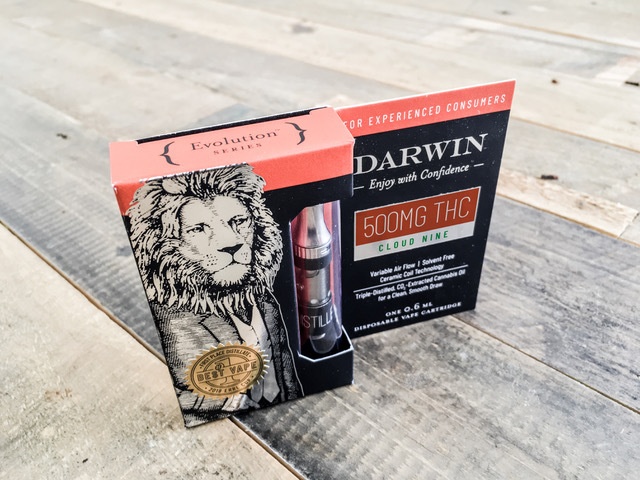 Nerd alert! Terpenes and terpenoids are classified as lipids, similar in structure to steroids, squalene, and cannabinoids. They are biologically synthesized from isopentenyl pyrophosphate (IPP), a molecular intermediate created in the HMG-CoA reductase pathway (the same pathway that produces cholesterol).  Every terpene contains a multiple of five carbons and eight hydrogen atoms, with variations such as the inclusion of an oxygen atom or cycling rings (This is called the C₅ Rule or Isoprene Rule, discovered in 1953).

The Scientific Classification of Terpenes and Terpenoids

Terpenes are classified based on the number of carbon atoms they are comprised of. Hemiterpenes are the smallest units and contain only five carbon atoms.  Monoterpenes contain 10 carbon atoms and are volatile and fragrant, the chief constituents of essential oils.  Sesquiterpenes are the most diverse group of terpenes, each containing 15 carbons and found is essential oils and resins. As the number of isoprene units increases, diterpenes, sesterterpenes, triterpenes, carotenoids are formed, and eventually rubber (>100 isoprene units). 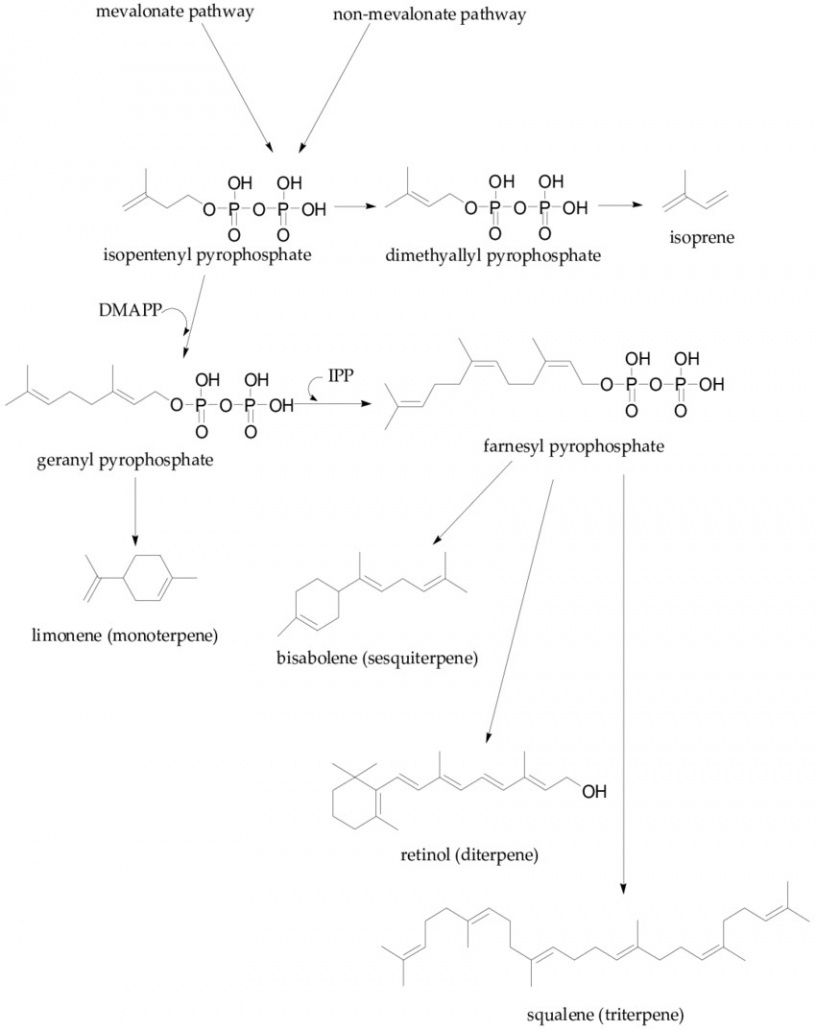 As stated earlier, phytochemicals may aid in disease prevention. There is substantial scientific support for this notion, although the variety of chemicals is vast and there many mechanisms we have yet to understand. Because terpenes are found in anything from eucalyptus to blood oranges, they are easier to study, legally and independently from cannabis.

It wasn’t until 1998 that researchers began investigating the therapeutic potential of terpenes in cannabis and applying them toward what we refer to as the entourage effect. This is the synergistic interplay of phytochemicals within the plant that may elicit a response different or greater than individual compounds themselves.  The effect is seen most clearly between cannabinoids CBD and THC, and is most supported by researchers such as Dr. Ethan Russo, who published a notable article on the idea in the British Journal of Pharmacology in 2011.  Curious about learning more?  Here is a spotlight on three interesting terpenes found in cannabis and supporting scientific evidence on their therapeutic value.

Three Terpenes Found in Cannabis and their Therapeutic Benefits

Alpha-humulene was first discovered in the lupulin glands (trichomes) of the flower or cone of the female hop plant, Humulus lupulus, playing a notable role in the plant’s characteristic smell. Cannabis’ sister-from-another-mister, hops are bred to elicit a plethora of different aromatic and flavor profiles. Because of the antiseptic ability of the acids, hops were historically incorporated in beer as a preservative, but they also balance the sweetness of the malt sugars in cooked wort. Many varieties are created and used specifically to bitter beer because of their high ????-acid (humulone) content, giving them a zesty, bitter flavor and odor.  The more aromatic varieties, like noble hops, are lower in ????-acids and higher in aromatics like ????-humulene – up to 40%, delivering a sensory experience familiar to both beer and cannabis connoisseurs alike. 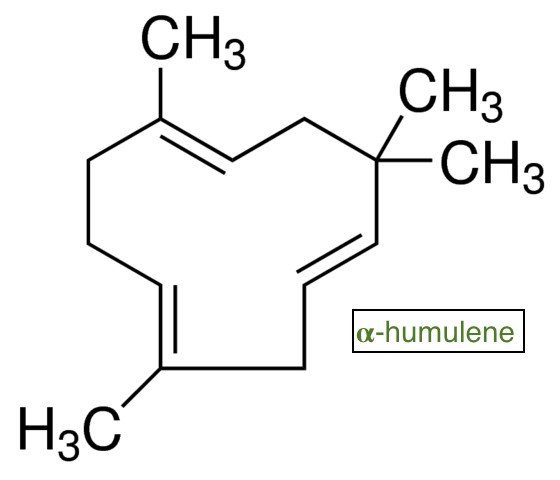 Valencene – you guessed it – is primarily found in valencia oranges, and is the precursor to the notable odorant found in grapefruit, nootkatone. Looking to combat the skin-deep signs of aging? An interesting study published in 2016 illustrated the effects of valencene on UVB radiation.  The researchers found that valencene interacts with TRPV1 and ORAI1 calcium channels, assisting in the regulation of photoaging and prevention of skin pigment changes and inflammation.  There is some say that valencene may also assist in promoting a calm mood, but more research needs to be done in this area in particular. 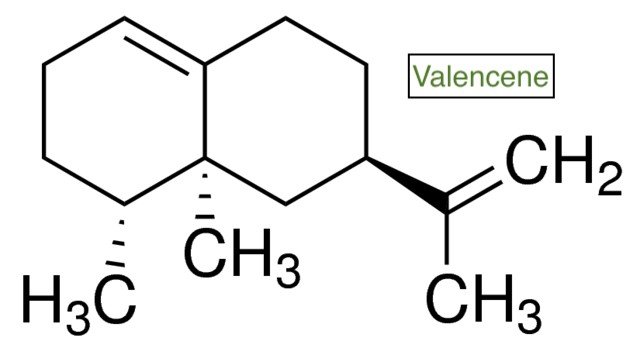 Nerol was originally discovered as a constituent of the prized essential oil neroli, which is extracted and steam distilled from the delicate and sweet blossoms of the bitter Seville orange tree.  The molecular structure is close to muguet – change the location of one methyl group and the aroma changes from sweet citrus to lily of the valley.  It is known for its stress-relieving properties and has been shown to reduce anxiety in mice through decreases in motor activity, similar to the effects of diazepam.  Found in small amount in cannabis, nerol has been shown to be an effective insect repellent, assisting in plant defenses. And if you’re a fan of wine, nerol, along with its stereoisomer geraniol, is an important part of the flavor nuances in young Muscat varieties. 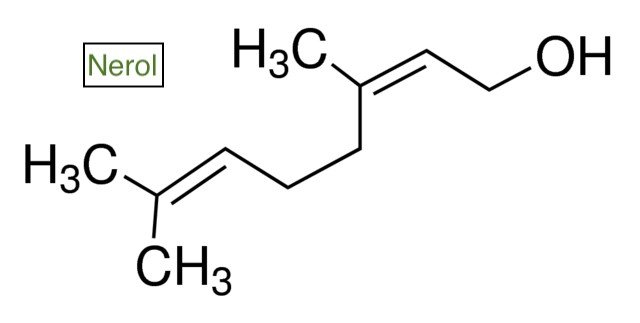 Until next time… smell ya later!